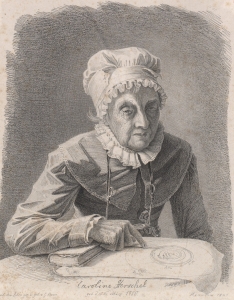 The Winner of the 2022 Caroline Herschel Prize Lectureship is Dr Alexandra Amon, a Senior Kavli Fellow at the Institute of Cosmology at the University of Cambridge. Citation for Dr Alexandra Amon

The Caroline Herschel Prize Lectureship was established by what is now the Herschel Society, in association with the Royal Astronomical Society, to celebrate Caroline’s memory by supporting promising women astronomers early in their careers. Caroline, William’s younger sister, started out as his assistant, but in time became recognised as an important astronomer in her own right, was the first to be paid as such, and was awarded the RAS Gold Medal in 1828.

The award is based on individual applications assessed by a small expert committee under the auspices of both Societies. The Application Form, which includes details on the Award itself, and eligibility, is available here:

The Prize Lectureship is supported by a very generous donation by Professor Fran Bagenal of the University of Colorado.