Herschel began his professional musical life as an oboist in the Hanoverian Guards regiment. In addition to the oboe, he played the violin and harpsichord and later the organ. He composed numerous musical works, including 24 symphonies and many concertos, as well as some church music.

Herschel moved to Sunderland in 1761 when Charles Avison  engaged him as first violin and soloist for his Newcastle orchestra, and where he played for one season. He was head of the Durham Militia band in 1760–61 and visited the home of Sir Ralph Milbanke at Halnaby Hall in 1760, where he wrote two symphonies, as well as giving performances himself.

After Newcastle he moved to Leeds, and then Halifax where he was the first organist at St John the Baptist church. When he was appointed to Bath he performed his own compositions including a violin concerto, an oboe concerto and a harpsichord sonata. In 1780, Herschel was appointed director of the Bath orchestra, with his sister Caroline often appearing as soprano soloist.

Dr Matthew Spring and colleagues put together an introduced virtual concert of music by William and some contemporaries  for the Royal Astronomical Society’s National Astronomy Meeting in Bath in July 2021. You can see the video here https://www.youtube.com/watch?v=uxVgbVNaL8E

A selection of CD recordings of Herschel’s music are available from the Museum gift shop.

Society member Alex Voice has embarked on an excellent  project to edit William’s music for performance. He has made a start on the Symphonies; the list will grow in time. You can access the pdfs at his website here. You are welcome to download them – and  also encouraged to make a donation to this Society!

William wrote a Treatise on Music that was never published. We offer here Treatise on Music  by Dominique Proust and Gus Orchard that provides an  extensive introduction about William, and particularly his music, then the Treatise itself, followed by a short commentary. We hope it is of interest. 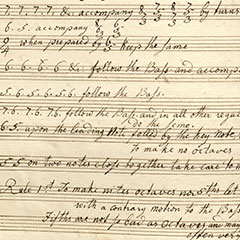