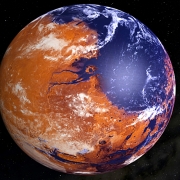 Investigations by robotic spacecraft have provided persuasive evidence that early Mars was water-rich, hosting numerous lakes and possibly a northern ocean that covered as much as a third of the planet. This talk will review the evidence for such an ocean as well as the process that may have affected its timing, duration, and ultimate loss.

Steve Clifford has cooperated with Mike Carr who gave the lecture on 5th November last year on Mars: Ancient rivers, lakes and oceans. But where is the water now? – so this lecture will follow on from Mike Carr’s.

Stephen Clifford is a Senior Research Scientist with the Planetary Science Institute in Flagstaff, Arizona, where he conducts research on the hydrologic and climatic behavior of water on Mars. His research has included studies of the stability and replenishment of Martian ground ice; glacial flow and polar evolution; the seismic and hydrologic effects of impact cratering; large-scale groundwater transport; and the and geophysical investigations of planetary environments with deep-sounding radars. Steve has been involved with radar investigations on a number of European Space Agency missions including the MARSIS orbital radar sounder on the Mars Express, the CONSERT radar on the Rosetta comet mission, and the WISDOM Ground penetrating radar on the ExoMars rover (which will be launched in September). He received his Master’s in Physics and PhD in Astronomy from the University of Massachusetts.

This talk was being given remotely from Texas and the video recording of this lecture is now freely available on the Virtual BRLSI YouTube channel. Please go the following link to view it.