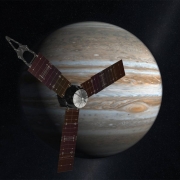 Juno’s principal goal is to understand the origin and evolution of Jupiter. Underneath its dense cloud cover, Jupiter safeguards secrets to the fundamental processes and conditions that governed our solar system during its formation. As our primary example of a giant planet, Jupiter can also provide critical knowledge for understanding the planetary systems being discovered around other stars. With its suite of science instruments, Juno is investigating the interior structure, mapping Jupiter’s intense magnetic field, measuring the distribution of water and ammonia in the deep atmosphere. JUNO is also the first spacecraft to fly over Jupiter’s aurora and measuring both the energetic particles raining down on the planet and the bright “northern & southern lights” they excite. A huge bonus is the small public outreach camera that is taking fantastic images of Jupiter’s beautiful clouds. The images – some science, some art – are processed and shared by the public around the world. NASA’s JUNO mission was launched in August 2011 and has been in orbit over Jupiter’s poles since 4th July 2016.

Dr. Fran Bagenal is a research scientist and professor at the University of Colorado, Boulder and is co-investigator and team leader of the plasma investigations on NASA’s New Horizons mission to Pluto and the Juno mission to Jupiter. Her main area of expertise is the study of charged particles trapped in planetary magnetic fields and the interaction of plasmas with the atmospheres of planetary objects, particularly in the outer solar system. She edited the monograph Jupiter: Planet, Satellites and Magnetosphere (Cambridge University Press, 2004).

Born and raised in the UK, Dr. Bagenal received her bachelor degree in Physics and Geophysics from the University of Lancaster, England, and her doctorate degree in Earth and Planetary Sciences from MIT (Cambridge, Mass) in 1981. She spent five years as a postdoctoral researcher at Imperial College, London, before returning to the United States for research and faculty positions in Boulder, Colorado. She has participated in several of NASA’s planetary exploration missions, including Voyager 1 and 2, Galileo, Deep Space 1, New Horizons and Juno.

The recording of this lecture is now freely available on the Virtual BRLSI YouTube channel. Please go the following link to view.