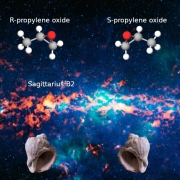 The laws of physics were long thought to be unchanged when viewed in a mirror.
We have known for over sixty years that they are not.
As Sakharov first explained, this asymmetry, in action during the first moments of the universe, may account for the prevalence of matter over antimatter today.
Likewise, as Pasteur first showed, the laws of biology are similarly asymmetric, as is exhibited by the structure of DNA.
In this talk I will discuss how there might be a causal connection between these two qualities, mediated by cosmic rays.
On the way, I will illustrate this uneven-handedness using recent, exciting, astronomical discoveries, involving black holes, neutron stars and exoplanets.

Roger Blandford took his BA, MA and PhD degrees at Cambridge University. Following postdoctoral research at Cambridge, Princeton and Berkeley he took up a faculty position at Caltech in 1976 where he was appointed as the Richard Chace Tolman Professor of Theoretical Astrophysics in 1989. In 2003 He moved to Stanford University to become the first Director of the Kavli Institute for Particle Astrophysics and Cosmology (KIPAC) and the Luke Blossom Chair in the School of Humanities and Science. His research interests include black hole astrophysics, cosmology, gravitational lensing, cosmic ray physics and compact stars. He is a Fellow of the Royal Society, the American Academy of Arts and Sciences, the American Physical Society and a Member of the National Academy of Sciences. In 2008-2010, he chaired a two year National Academy of Sciences Decadal Survey of Astronomy and Astrophysics. He was awarded the 1998 Dannie Heineman Prize of the American Astronomical Society, the 2013 Gold Medal of the Royal Astronomical Society, the 2016 Crafoord Prize for Astronomy and the 2020 Shaw Prize for Astronomy.

The recording of this lecture is now freely available on the Virtual BRLSI YouTube channel. Please go the following link to view. https://www.youtube.com/watch?v=wjfjZQczmX8

The Looking Glass Universe - From Baryogenesis to Biogenesis

Is there a connection between the excess of matter over antimatter and handedness in biology?