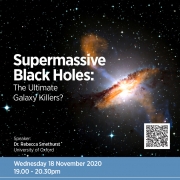 The talk is being run by the University of Bath in conjunction with the Herschel Society and the Royal Astronomical Society.

There are over one billion galaxies in the Universe, each home to over a billion stars and one central supermassive black hole weighing in at up to a billion times the mass of the Sun. Theoretical astrophysicists think that these supermassive black holes can either heat or remove the cold hydrogen gas within a galaxy needed to form new stars through a huge outburst of energy. This process has to occur in computer simulated universes to stop galaxies evolving and growing too large. However, the big problem is that astronomers have never actually observed this process happening in our Universe.

This talk will focus on the research of astrophysicists trying to understand the conflict between observations of galaxies and their supermassive black holes and the current best model of the Universe. In particular Dr. Smethurst will highlight the work being done by the MaNGA survey team who are attempting to map the insides of over 10,000 galaxies in order to solve this long-standing problem.

Dr Becky Smethurst is an astrophysics research fellow at Christ Church at the University of Oxford working with the innovative data provided by the SDSS MaNGA survey to determine the effects of supermassive black holes on their host galaxies. She was awarded her PhD by the University of Oxford, using the public’s classifications of the shapes of galaxies from the online citizen science project Galaxy Zoo in her thesis on galaxy evolution. She then had a research fellowship at the University of Nottingham where she also started presenting videos for the science YouTube channels Sixty Symbols and Deep Sky Objects.

A slightly edited recording of this lecture is available on the following link. 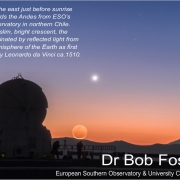 Unless they are astronauts, humans must view the Universe through the window of the Earth’s atmosphere. Although a clear sky is relatively transparent to visible light, bright astronomical objects — most noticeably the Sun — can paint the entire sky with luminosity, colour and shadow to be captured by both landscape painters and photographers. How does this happen and what physical processes are responsible for these beautiful colours, gradations and patterns? The talk explains some of this and is illustrated with spectacular images of the sky from space and from above the European observatories in the Chilean Atacama desert.

Robert (Bob) Fosbury is currently an emeritus astronomer at the European Southern Observatory and an honorary professor at the Institute of Ophthalmology at UCL.

The video recording of this lecture is now freely available on the Virtual BRLSI YouTube channel. Please go the following link to view.

There is also an extended paper on this subject as a PDF file on the following link.